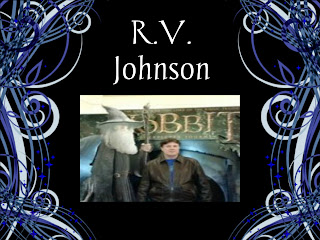 For more years than he cares to recall, R.V. Johnson has wanted to write a good story – an epic tale chock full of wonder and imagination on a rich, planetary scale. He's wanted to show a fantastical adventure where the characters come as alive as the new world they travel through, one that he couldn't read fast enough to sate his hunger to discover what happens next, like he used to read. And he wants it for everyone. He hopes he has succeeded.

R.V. Johnson's “Beyond the Sapphire Gate” is a grand, epic fantasy with science fiction roots where two sisters and their father struggle with life's hardships as they hold the fate of a world in their flawed, unknowing hands.

Currently, he is writing the second in this series, and a science fiction novel. He writes that if you don't like imperfect, lovable characters struggling to use magic, telepathic canine-like creatures, Dark Lords, and Users of flowing magic both dark and light, then perhaps, this is not for you.

RVJ: Fantasy and Science Fiction have always fascinated me, I love reading about wondrous worlds, high technology, the characters, and the way the magic works. If written well, one could believe such power is attainable. The great ones would end with me wishing for a power of my own.

APRI: Do you develop the world of a novel fully in your mind before beginning to write?

RVJ: Not fully for the first one in a series, though I do have a grand picture of it in my mind from the start, the cultures of the people, the technology or the lack of it, and how the magic system must work. There are rules powerful magic has to follow or the bad people would destroy the world it took the whole novel to build… in one paragraph. However, I did sketch out a map of the geography of Astura beforehand. It’s a rich, diverse world, I didn’t want to get lost.

APRI: What is the first book you read that made you think, “I have got to write something like this someday!”

RVJ: There were three and all of them series: J.R.R Tolkien’s The Lord of The Rings , Roger Zelazany’s The Chronicles of Amber , and Robert Jordan’s The Wheel of Time . They raised my sense of wonder, imagination, and adventure, in that order.

APRI: Tell us a little bit about yourself. How long have you been writing? What genre do you write?

RVJ: I’ve written on and off for over eighteen years, (only working on it occasionally, as I focused on my children and their education after losing my wife eleven years ago) the last four years have seen steady writing, as much as my free time allowed. Most all of it is in the fantasy genre with some science fiction elements.

APRI: Who has influenced your writing the most?

APRI: Where do you get your inspiration from?

RVJ: My family. I’ve always had a firm belief in family values.

APRI:   What inspired your first book?

RVJ: I used to tell stories to my late wife. Invariably, she's say, 'go on, you've got my attention', we'd talk until the sun began to rise.

APRI: If you couldn't be an author, what would your ideal career be?

RVJ: To own an island paradise resort.

APRI: Is there a message in your novel that you hope readers will grasp?

RVJ: Nothing specific, though I do hope to peak a sense of wonder.

APRI: Do you have a scene in the story that was your favorite to write?

RVJ: There were many. Three come to mind immediately. Early on this scene where Crystalyn first practices her symbol power as she's dying. A few chapters after that, Jade uses her ability on a newfound ally attempting to survive a dark place, a monstrous telepathic assault occurs soon after. Later on, Garn's amazing dance with his twin longswords flowed from my fingertips without much prompting; all were a joy to write.

APRI:  Tell us about your creative process, from initial idea to published manuscript.

RVJ: The initial idea began two decades ago, though back then, I hadn't expected it to take place on two worlds. It began again four years ago by wanting something more traditional to read. There haven't been any great epic fantasy series available in the third person perspective lately and I'd read those, so I developed Beyond the Sapphire Gate from notes on the three main characters. After four years of writing, revising, attending writing groups, and revising again, I wrote an ending that didn't change much, and hired an editor. Then the manuscript went through a range of proofreaders and beta readers. After that, I queried a mix of around ten agents and publishers but quickly lost patience with those that didn't bother to send a polite 'I'll pass' letter. I published it solo.

APRI: How do you feel about the popularity of ebooks?

RVJ: I still love printed books. E-readers are nice too, though I do see a prosperity to store books and not have time to read most of them. I have done it.

APRI: Is there and aspect - of writing you don't like?

RVJ: Yes, and I'll make a supposition most authors - bestsellers do not - do like marketing, I don't. Nevertheless, it is a part of publishing, traditional and independent. 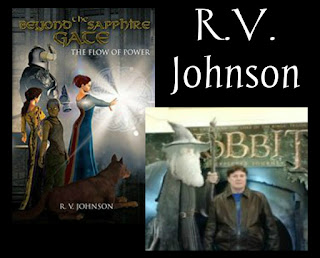 APRI: Do you have any strange writing habits (like standing on your head or writing in the shower)?

RVJ: Suddenly speaking furiously into my phone's voice recorder has earned me many looks...even some frightened ones, if I happened to be describing a creature at the time.

APRI: What is something you hope to accomplish before you die?

RVJ: Seeing Beyond the Sapphire Gate and the rest of the series in 'The Flower of Power' progress to cinema, I love adventure movies with epic struggles for survival. Though convincing The Lord of the Rings producer Peter Jackson to do it might create hardship on whomever I can con into asking. I love those movies, they were exceptionally well done.

RVJ: The roguish male who's never fully made it to adulthood.

APRI: Do you have a favorite quote that inspires you?

RVJ: I wrote one for own inspiration and shared it with the world: "Strive to be the gem the dragon hoards".

APRI: What are the most important elements of good writing? According to you, what tools are must-haves for writers?

RVJ: Conflict, pacing, amazing characters, and a lush world. Believe in yourself, Write every day.

APRI: What do you in your spare time?

RVJ: Spending time with family. Even if it's writing on the laptop in the same room or outdoors. I've learned to multitask.

APRI: What makes you smile?

RVJ: When a reader mentions how much they loved the novel. When fans discuss the story, I can't stop smiling; connecting with the readers is the greatest.

RVJ: What fans of certain novel(s) would also enjoy reading your book(s)? There are many besides those mentioned in the interview: Terry Brooks, The Sword of Shannara series, Edgar Rice Burroughs, of Mars series, slightly older Harry Potter fans, and all books in epic fantasy rich in imagination to the end.

For more information about R.V. Johnson see links below: