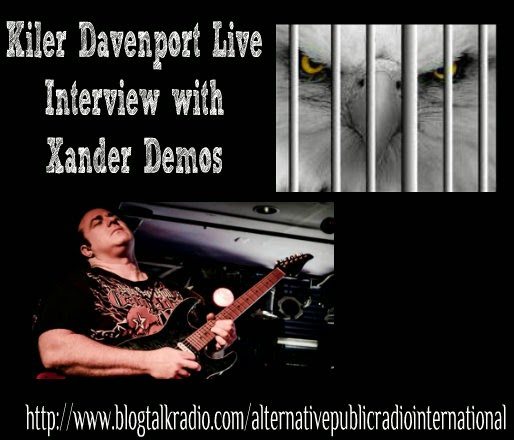 Interview with Xander Demos with Kiler Davenport by Kiler Davenport on Mixcloud
Xander Demos is one of today’s premier shred metal guitarists. Based in Pittsburgh, PA, he currently fronts his own band, XDB and national tribute act, James Rivera’s Sabbath Judas Sabbath, as well as playing in Rivera’s solo band. Xander performs in excess of 100times a year, and he is active in recording collaborations with artists all over the world. Xander plays guitars from Suhr, McNaughtand Conklin, with whom he has endorsement deals. His endorsement from these guitar companies is a testament to his impressive skills and his deep commitment to playing the best guitars in the world.

Xander's style ranges from the beautifully melodic to the jaw-droppingly insane. His playing encompasses much of what he has learned and absorbed from other players over the years; artists like Shawn Lane,Eric Johnson, Steve Vai, Vinnie Moore, Jason Becker, Neal Schon, Michael Romeo and John Sykes. One constant in his music is a focus onstrong guitar melodies. On February 29, 2012, Xander released his full-length follow-up to his EP "Road To Guitarcadia.” The new album was mixed by CJ Snare of Firehouse. The album is simply titled, “Guitarcadia,” and it contains 10 incredible tracks of pure guitar heaven. This release will be followed by an instructional DVD, while performing with his two live bands every week and passing on his passion for guitar by giving in person and online instructions to eager students.

Recently,Xander has been making quite the name for himself and his solo band by appearing as support for acts like Symphony X, Adrenaline Mob, Buckethead, UFO, Lizzy Borden, Kip Winger, Neil Zaza and Dio Disciples. He has had two #1 Metal and Progressive music videos on Myspace, with his videos “Right Angles” and “Chase The Sun.” His last single, “White Knuckle Driving” received airplay in Brazil, Russia, Denmark, the UK and all over the world! The video received in excess of 120,000 Youtube views. Xander has recently been featured on The Real Radio Show with AJ Pero of Twisted Sister, SteveVai’s GuitarTV.com, GuitarWorld.com, Hair Metal Mansion, Iron City Rocks, Metal Temple, Brave words and many other top rock and metal shows and websites. In August 2012, Xander was named Guitar Shop TV’s New Artist Showcase Winner. Nominated for Best Guitarist, in the 2011 and 2012 Iron City Rocks Music Awards and 2013 Southern Star Network Independent Artist of the Year, Xander’s playing appears on several releases from other artists: Ged Rylands (Ten, Tygers of PanTang,) Derek Buddemeyer (Down Boys Records) and Liberty ‘N’Justice’s long awaited “Cigar Chronicles,” also featuring George Lynch (Dokken) Jeff Labar (Cinderella) and Jerry Dixon(Warrant.) He will also be included on two upcoming guitar compilations, “Guitar Feast” and “Guitar Wizards,” that will also include Lynch and Jake E Lee, among others.

Inaddition to these accomplishments, Xander is an avid animal lover. Always looking for projects that will aid these beautiful creatures,Xander is donating a portion of his album sales to the ASPCA.

Posted by Kiler Davenport at 11:31 AM