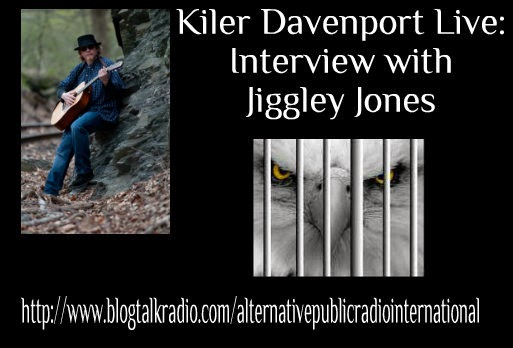 Interview with Jiggley Jones with Kiler Davenport by Kiler Davenport on Mixcloud
“His sound is so huge, it seems like it is everywhere and is as much coming to him as from him. He appears to be drawing in the sound while drawing in the listener.” A quote from former manager George Grauer, and a great description of the musical attitude that encompasses the debut release from singer/songwriter Jiggley Jones.

Now under the professional direction of MTS Management Group and Michael Stover, who says “ Jiggley has that one-of-a-kind sound that I look for in an artist. His songs will touch you and move you with their beautiful lyrics and melodic strength.”

Now let’s not let the word “debut” fool you though. Just like the title of this 4 song EP, “No Spring Chicken”, Jiggley himself has lived. “Lets face it, I’m not 18 anymore and thank God for that”,says Jones. “I’m no longer coming from a place that I have to in order to fit in, I’m coming from a place that is different because that is what I’ve become. No tattoos, no piercings, just music,strong and true, music that paints a picture.”

However you want to look at this picture, whether it’s Americana, Wide Open Country, or acoustic whatever, this artist represents life, hope, and human nature as only a seasoned person can see it. The Top 5 Roots  Music Report release, starting with the overwhelming strength of “Baby Blue”, a deep celebration of a new born life, to “Welcome Home” with it’s ability to remind you how comforting the idea of  home can be, to track three, a fun hillbilly party called “Ain’t That Alright’” (IBA/CMG chart, #81), “No Spring Chicken”covers enough variety (the spice of life) to remind you of bands like The Beatles. The final track really takes variety to the next level,being an early Christmas release called “Christmas 365”. This song is full of holiday reminders and touches on the idea that if Christmas was all year round then would it lose it’s special place in one’s heart. On the other hand, if we treated everyday like Christmas would life be a better experience all around.

Jiggley Jones, the project, came about in late 2007. Jiggley, whether alone or a member of various bands in the past has written or co-written well over 100 songs. His experience has taken him through various phases and musical endeavors including a stint during his younger years working in entertainment public relations in Los Angeles. With some success on college radio, Jones was also, as a member of a band called “Q”, involved with soundtrack projects on select MTV shows such as The Dennis Rodman Show, Cindy Crawford’s “House of Style”, and the reality show Road Rules. His band was also used in the AON Films movie “Tainted Love”, directed by Mathew Ross. All these successes were accomplished while under the professional direction of industry representatives like N.O. Management based in London, England as well as Magic Music Management and Peter Baron Productions in New York.

More currently he has worked with Nashville producer Terry Wendt, a former bandleader for Shania Twain. For this new release though, he has teamed up with LA based producer Chris Tristram. His live shows have taken him to Nashville and this year’s CMA Festival where he performed at BB King’s Blues Club, as well as other top notch venues such as The Hard Rock Café in Philly, The Bitter End in NYC,and The World Café in Wilmington, Delaware.

Posted by Kiler Davenport at 12:12 PM