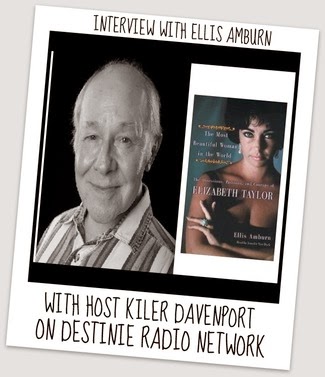 THE MOST BEAUTIFUL WOMAN IN THE WORLD: The Obsessions, Passions, and Courage of ELIZABETH TAYLOR By Ellis Amburn interview with Host Kiler Davenport THE MOST BEAUTIFUL WOMAN IN THE WORLD is a magnificent biography of the Academy Award®-winning actress and legendary beauty. The book captures the unparalleled Elizabeth Taylor in all her tragedy and splendor -- her tumultuous loves, her doomed affections, her shocking excesses, her courage, and her inimitable style. Filled with stunning revelations about the men in her life (Burton, Clift, Hilton, Dean, Fisher), the book also details Taylor's life in recent years. Amburn shares information about Taylor's health concerns, her unswerving devotion to Michael Jackson and her reaction to his untimely death, her appointment by HRH Queen Elizabeth II as Dame Commander of the British Empire and Taylor's work to support gay rights. THE MOST BEAUTIFUL WOMAN IN THE WORLD is a candid, incandescent retelling of Taylor's life is cinematic in scope, and provides a glorious celebration of a brilliant star that none in Hollywood or heaven could ever outshine. About the Author: Ellis Amburn worked as a reporter-researcher at Newsweek before becoming a book editor at Putnam, where he edited Jack Kerouac, John Le Carre, William Golding, Edward Albee, and Paul Gallico. He was also editor-in-chief at Delacorte, and at Morrow, an editor and collaborator on books by Shelley Winters, Sammy Davis, Jr., Lana Wood, and Priscilla Presley on her #1 bestseller, ELVIS AND ME. He is the author of DARK STAR: THE ROY ORBISON STORY; PEARL: THE OBSESSIONS AND PASSIONS OF JANIS JOPLIN; BUDDY HOLLY; and SUBTERRANEAN KEROUAC.
Posted by Kiler Davenport at 12:54 PM